Sons of Union Veterans of the Civil War 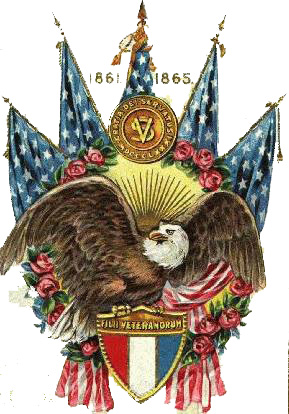 Click here for information on the Centennial Camp Charitable Fund. 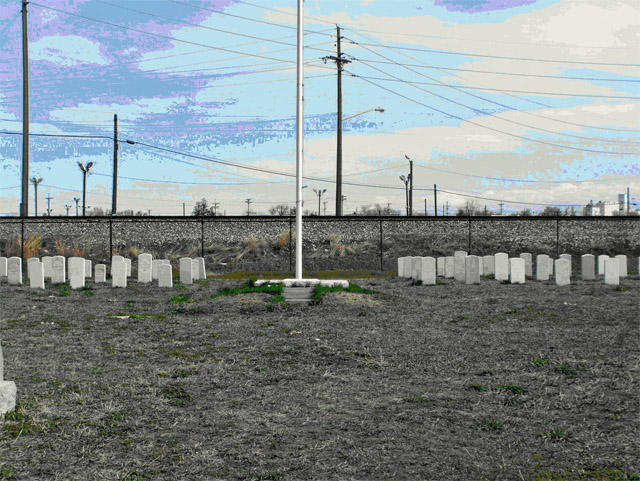 During the 1880s, the Grand Army of the Republic (G.A.R.) posts in Denver purchased section 27 at Riverside Cemetery to bury their Comrades and other Union veterans of the Civil War. This was a very common practice through the country as Civil War veterans began passing away in increasing numbers. Unlike other G.A.R. burial plots, the Denver G.A.R. did not provide a monument to their service. They erected a flagpole considering the flag they fought to defend was monument enough.

That stark flagpole stood for years amidst the Civil War graves of the G.A.R. in Denver’s Riverside Cemetery. Centennial Camp 100, Sons of Union Veterans of the Civil War wanted to elevate and honor these veterans and launched the Riverside Flagpole and Veterans Walkway Projects.  On June 14, 2013, with the pouring of a concrete platform large enough to hold a color guard, the Flagpole Project was completed.

The next project was the Veterans Walkway and the volunteers of Centennial Camp 100 broke ground on April 27, 2014 on the first block of memorial bricks for the walkway.  We continued to work on weekends, around weather, heat and cold, to complete the five 8’ x 8’ brick blocks of the Veteran’s Walkway on August 8, 2015.

The Camp then purchased and and arranged for the installation of the GAR memorial stone. The stone was made and installed by the Wilhelm Monument Co. of Colorado Springs. 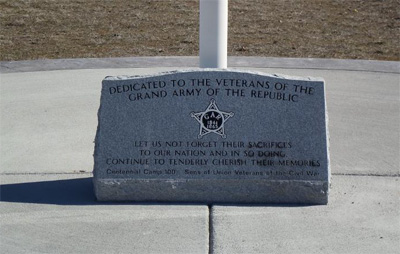 The inscription on the stone reads: DEDICATED TO THE VETERANS OF THE GRAND ARMY OF THE REPUBLIC LET US NOT FORGET THEIR SACRIFICES TO OUR NATION AND IN SO DOING, CONTINUE TO TENDERLY CHERISH THEIR MEMORIES Centennial Camp 100 - Sons of Union Veterans of the Civil War

Now, more than 150 years after the war they fought to preserve the Union and when most Americans know little of the G.A.R., Centennial Camp 100 is building a monument to recognize that service. The project consists of a monument dedicating section 27 to the G.A.R., a raised plaza around the flagpole, and a memorial walkway from the roadway to the flagpole.

The Fairmount Cemetery is the owner of Riverside Cemetery.  Judge Robert P. Fullerton, Chairman of the Fairmount Board and a member of Centennial Camp 100, and also Kelly W. Briggs, President and CEO at Fairmont Cemetery, granted approval of the projects thus enabling the camp to complete the work.  Centennial Camp 100 is grateful for their time and support.

We are proud to have currently received memorial bricks for veterans from the Civil War, World War II and Vietnam with their memorial bricks in the walkway.  Our goal is to honor all veterans who have served our country through its history.

The public is invited to participate by purchasing memorial bricks for the walkway commemorating a veteran’s service. The veteran does not have to be a Civil War veteran, or be buried at Riverside Cemetery, or have died. The only requirement is that person is a U.S. Veteran from any period. Please click on the link below to download an order form to order one or more bricks, . Mail the form and your check to the address listed.

Contributions are tax deductible as indicated by this IRS letter.

Click here to access a PDF form you may fill out online, print and mail with your contribution.

Back to main page